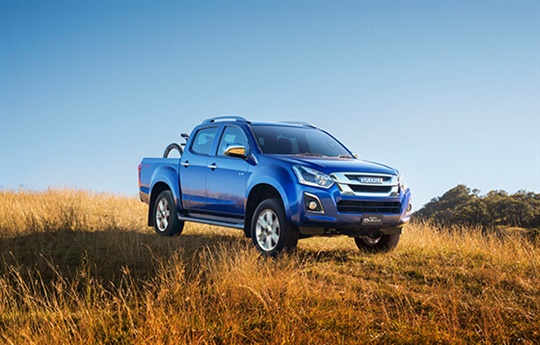 Driven towards a target of 10 years of continual growth to commemorate the 10th Anniversary in Australia since starting in 2008, Isuzu UTE Australia (IUA) has established a new annual sales record of 27,640 vehicles in 2018 — successfully growing the two-car brand by 7.1% compared with 2017, according to the annual VFACTS report published by the Federal Chamber of Automotive Industries. IUA performed strongly in a softening market in Q4’18 by posting our highest-ever December sales result, retailing 3,244 vehicles — an increase of 10.5% on the previous year. Proving uber-popular amongst Australian 1-tonne Ute and SUV owners, IUA has for the second year in a row ranked as the 13th best-selling automotive brand nationally, out-selling some well-established brands including, BMW, Audi, Suzuki and Jeep.

Labelled as the ‘year of the ute’, 2018 has played witness to the highest sales performance for the Isuzu D-MAX, achieving 18,550 sales within the 1-tonne Ute segment — a 4.7% increase on 2017 results. December alone netted a strong 2,184 units for 3rd in segment and 13.0% market share — an increase of 6.3% on the previous year. D-MAX reconfirmed itself as one of Australia’s favourite Utes — climbing the ladder from 5th into 4th position to outsell the Holden Colorado (18,301), Nissan Navara (16,469) and Volkswagen Amarok (9,290). D-MAX traded blows with Colorado across several months in the head-to-head YTD sales race, before cementing its 4th position ahead of Holden Colorado in December. D-MAX 4x4 ranked 5th within the sub-segment — recording 13,223 units with a 3.3% lift compared with 2017 results. Whereas D-MAX 4x2 ranked 2nd within the sub-segment — posting 5,324 units with an 8.2% increase on 2017 results.

Customer Satisfaction has remained a core priority of IUA in 2018, with Service Retention Campaigns and ongoing CSI and SSI Programs boosting and improving Customer loyalty and satisfaction. Roy Morgan is yet to release a conclusive ‘Customer Satisfaction’ annual report for 2018, but to date IUA has consistently traded the #1 position with another Japanese automotive brand over the last 6 months and is on track for a top two finish.

“The Australian market is unique, with over seventy automotive brands bidding for a spot in customers’ garages nationwide.” commented IUA Managing Director, Mr. Hiro Kuramoto. “However, the sentiment towards Utes and SUVs has never been stronger and are the leading segments within the market — the exact segments the D-MAXand MU-X sit — and in 2018 we witnessed our strongest result in 10 years, with more customers choosing an Isuzu than ever before.”

“Suffice to say we have one of the most loyal customer bases in the market, owing much of our success to satisfied customers who have proudly advocated for the brand — referring their friends and family to Isuzu UTE. 2018 played host to key improvements to our product and service offering — Service Plus 5-5-5; 5 year warranty, 5 years roadside assistance and 5 years Capped Price Servicing package — reconfirming our reputation for performance, dependability and value. With customer feedback in mind, our Dealership network has been further refined to better cater for our customer’s needs and expectations with 149 outlets across every state and territory in Australia. 2019 brings with it a new decade for IUA, with new challenges and targets to strive towards. However, we are here for the long haul and committed to our current and future customers.” concluded Mr Kuramoto.