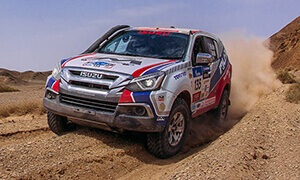 The ISUZU MU-X, first production car across the line.

The gruelling 2017 Silk Way Rally was a true test of man and machine against Mother Nature, and one in which Isuzu Motorsports in car #135 proved itself by not only winning class stages but the respect of other competitors, organisers and officials.

33 cars started the rally and only 23 finished. Of those that started, five were production cars – just like those at your local car dealer with only minor safety modifications – yet only two made it to the end. Out of these remaining two, the Isuzu MU-X finished first with a lead of over 200 hours.

Isuzu Motorsports finished 14th outright, a result that includes vehicles in the main category, cars specifically purpose-built for rally raids that have little resemblance to their showroom counterparts.

It is a compelling result that demonstrates the durability of the MU-X and the endurance, integrity and tenacity of the team, particularly of driver Adrian Di Lallo and co-driver Harry Suzuki. Of the 13 stages raced (Stage 14 was cancelled), Isuzu Motorsports finished faster on nine stages than cars in the main category, those exclusively designed to combat rally raid conditions. Impressively, they finished 93 hours faster in the overall rankings than the highly modified diesel 4x4 Mitsubishi L200 in the main category.

Travelling 9,599 kilometres and racing nearly 4,000 kilometres through Russia, Kazakhstan and China, the conditions were some of the most challenging of any rally raid on the planet.

From mountainous sand dunes as far as the eye could see to the thick slick mud, torrential rain, dust storms and collapsed bridges, the Isuzu MU-X not only withstood the challenge but also strived to prove it is a serious rally raid contender.

The biggest test of the Silk Way Rally was in the first five stages. Isuzu Motorsports won four of the five stages over their closest production car rival, the Land Cruiser 200 of team Toyota Autobody, a veteran team with 13 Dakar class titles; they were forced to retire after Stage 5. 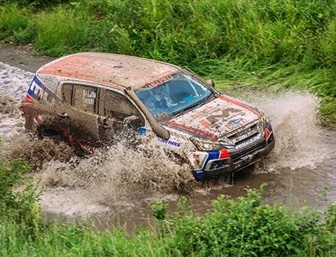 From then on, Isuzu Motorsports held a comfortable lead over other production cars.

"The 2017 Silk Way Rally has been a very important race for us," West Australian driver Di Lallo said.

"It felt good to be behind the wheel of a production car that's competitive. The terrain was extremely challenging and the MU-X just kept going. In fact, we were the only production car to compete and complete every stage of the Silk Way Rally under our own steam, without outside assistance.

"As a team, we are very proud of what we have achieved, how we worked together and how we faced the challenges thrown at us.

"We have taken away vital intelligence on car construction, setup and the way we do things.

"We now know that we have the speed to match it with the best in the business.

"Now we just need to work on some refinement to the awesome platform we have and come back with our swags, goodwill and the credits we have banked with the rally gods.

"We have enjoyed a great deal of success and gained the respect of many through our speed, tenacity and integrity," Di Lallo said.