In its debut season of competition, the Caltex Delo® Racing Isuzu D-MAX SuperUte has won the 2019 ECB SuperUtes Championship, with Ross Stone Racing’s Tom Alexander driving onto the podium for the fifteenth and final time, at the Coates Hire Newcastle 500, 22-24 November 2019.

Proving to critics that he made the right choice when he switched from a Holden Colorado that he raced in 2018, to an Isuzu D-MAX, Tom Alexander promptly proved his pace by claiming P2 at the season opener in Adelaide, before taking top spot in the following round in Perth. With solid points under his belt, Alexander commanded each race round from a comfortable position near the front, consistently finishing with solid points to build his lead over the course of the eight round Championship. 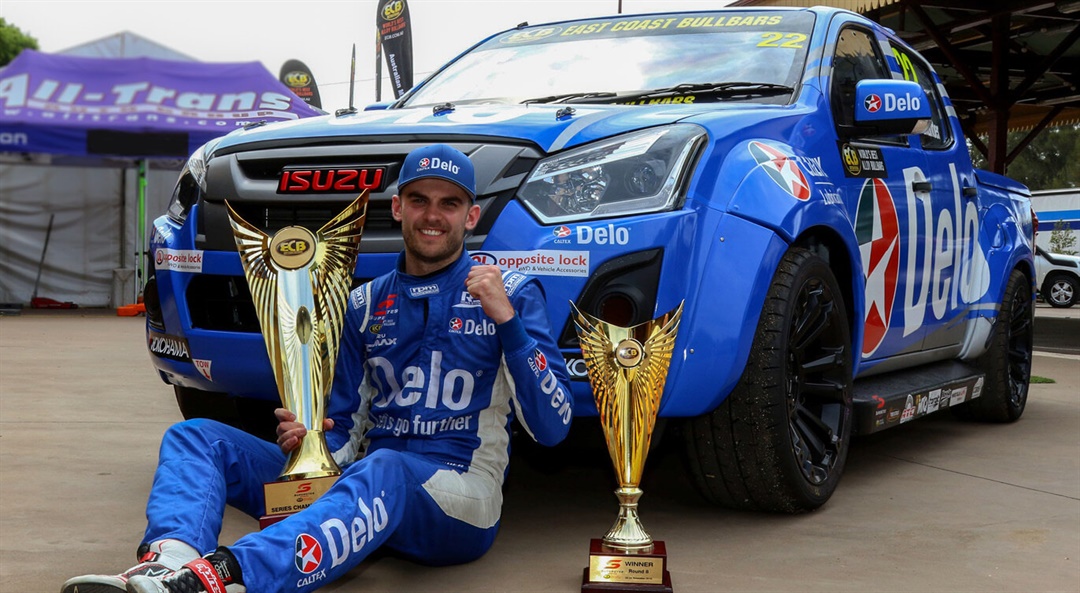 Fast-forward to the final round at the Coates Hire Newcastle 500, which Tom Alexander started with a 60-point lead over championship rival, Cameron Crick. Showing pace early, the young-Kiwi capitalised on that lead, taking Pole Position on Friday, followed by the win in Race 1 on Saturday. With an unassailable lead in the points, Alexander finished the final two races in P2—securing himself valuable points to win the round and more importantly, the 2019 championship.

Over the course of the twenty four race season, Alexander chalked up five wins, fifteen podiums and three pole positions, to a total of 1,203 championship points—67 points clear of Cameron Crick in 2nd.

It feels so good to lift that trophy at the end of the season, it was a long road to get to here, but we did it!

I couldn’t have asked for a better team to support me, a better car to race, better sponsors— thanks Caltex Australia and Isuzu UTE Australia— who believed in me, or a better bunch of blokes to race against— they all drove incredibly well throughout the season.

Ross Stone Racing Team Boss, Ross Stone said, “Tommy raced smart all season and he did an incredible job to win the 2019 Championship”.

“He (Alexander) had the right tool for the job this year—switching from the Colorado to the D-MAX for the 2019 season—which performed incredibly well and allowed him to consistently earn points all season, rather than focusing on outright race wins. It’s a strategy that has worked for Champions all around the world and I’m proud to see Tommy lift the Championship trophy at the end of this season,” he concluded.

With the SuperUtes category set to shift from the manufacturer supplied diesel power plants to a controlled-class V8 petrol power plant, no decision has currently been made if the Caltex Delo® Racing Isuzu D-MAX SuperUte will return for the 2020 ECB SuperUtes Season.

For the 2019 ECB SuperUtes Season, Ross Stone Racing prepared and campaigned the Caltex Delo® Racing Isuzu D-MAX SuperUte, with Tom Alexander behind the wheel. 2019 marks the first season that Isuzu UTE Australia has been involved, partnering with Ross Stone Racing on the D-MAX SuperUte, which is built on the Isuzu D-MAX Crew Cab ute platform, utilising the production fitted 3-litre turbo diesel engine, with minor revisions to the powertrain and suspension setup.

Championship Points at the conclusion of 2019 ECB SuperUtes Season