The surf wasn’t the only thing pumping at the Gold Coast 600, with Ross Stone Racing’s Tom Alexander riding out the weekend to take pole and to win in the streets of Surfer’s Paradise in his #22 Caltex Delo® Racing Isuzu D-MAX SuperUte.

Looking to ride the wave of momentum from the previous round at Bathurst, Tom Alexander eagerly took to the warm and sunny street circuit during the practice sessions on Friday, utilising the full forty minutes to improve his lap times, and explore the braking zones around this typically unforgiving track. The #22 Caltex Delo® Racing Isuzu D-MAX SuperUte ended day one second quickest, behind 2018 ECB SuperUtes Champion, Ryal Harris.

“I was struggling with brakes early, especially in the first session. The second session was better, but we have some work to do to get up to Ryal’s pace," Alexander reflected during a post-practice interview.

Qualifying was action packed with red flags waved early, after Jaiden Maggs clouted the concrete wall nose-first, at the exit of Turn 11. With 14 minutes remaining in the session, Ryal Harris was sitting comfortably atop of the timesheets and out of his Mazda BT-50 in the pits, trusting his time of 1:30.7404s would be a big enough buffer to earn him pole position.

With only a few minutes remaining, Alexander re-joined the resumed session, only to find the D-MAX was down on power. Alexander promptly pulled into the pits and the Team assessed the situation and tightened what was found to be a loose turbo hose clamp. With the D-MAX back to normal race pace and with only 3 minutes left in the closing stages of qualifying, Alexander set the fastest time, beating Harris’ time by 0.0231s, to claim the Team’s first pole of 2019.

“On my second flying lap, the turbo hose clamp came off and I had no boost, which meant I had to return to the pits. But the Ross Stone Racing boys did a really good job to get it fixed and get me back on track with five minutes to go,” Alexander said.

“I managed to nail my final lap and I’m very happy to get my first pole of the season, especially with the five bonus points.” 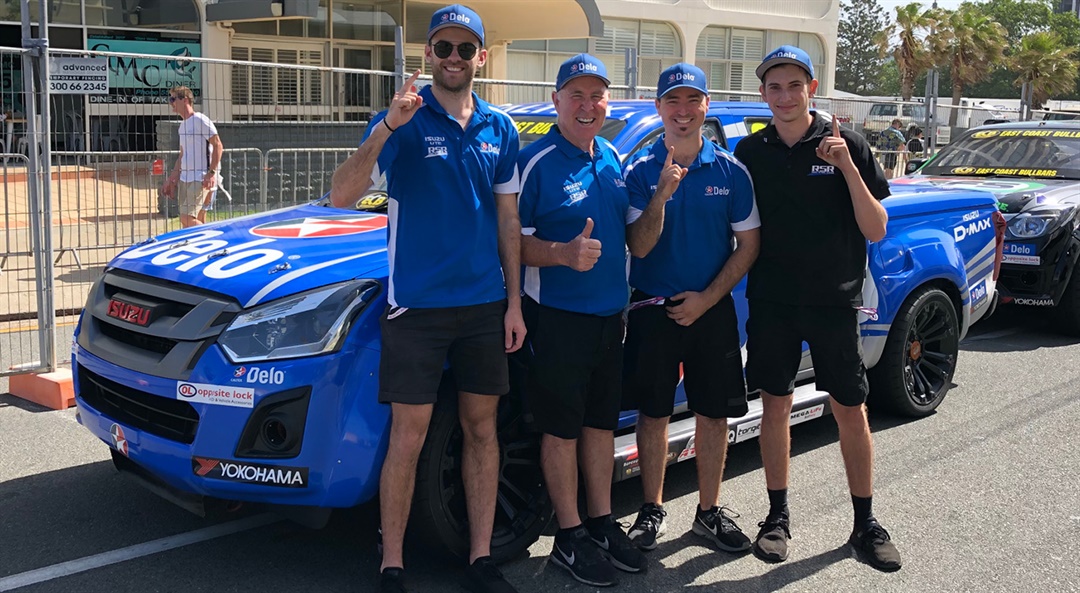 Starting from pole, Alexander led the field on the opening lap of Saturday’s twilight Race One. Harris, who was close behind in P2, upped the pressure on the D-MAX driver, before putting a move on at turn 4, on the second lap.

“I knew Ryal was going to have a dive at some point, he’s been strong under brakes all season, when he fired down the inside at Turn 4, there was no point fighting too hard,” remarked Alexander.

“With the championship situation, I have a lot more to lose than he does. I was happy to finish second and extend my championship lead,” Alexander continued.

Race Two dawned on typically perfect conditions renowned to the Gold Coast, with Alexander starting from the back row—as per the reverse grid format of the category. Also typical of the dual-cab ute category was the opening lap chaos, which had well and truly returned, with Ben Falk spinning Toby Price into the wall at Turn 3. Shortly after in a separate incident, Gerard Maggs, Craig Woods and Ben Walsh ended up in the tyre barrier at Turn 11, before the safety car was deployed. Unfortunately, contact at the Turn 1 chicane on the opening lap with J.Maggs damaged the steering alignment on Alexander’s D-MAX. However, as the Safety Car pulled away and racing had resumed, Alexander managed to pass J.Maggs for second position, with Harris following suit and passing J.Maggs moments later.

In the closing stages of Race Two, Harris got a good drive out of the final corner and pulled alongside Alexander—going door-to-door down pit straight, before sticking the pass into the Turn 1 chicane, on lap six. Alexander nursed the #22 Caltex Delo® Racing Isuzu D-MAX SuperUte home in third position.

Setting the tone for Race Three was the accumulation of points from the first two races; earning Alexander a front row start for the final Race of the Gold Coast Round. The Caltex Delo® Racing Isuzu D-MAX driver got a clean getaway to beat Harris to the first set of chicanes to lead the opening lap. Sitting in P2, Harris immediately turned up the wick on Alexander, braking late to make a move on the D-MAX around the outside of Turn 11, but found contact with the tyre barrier at Turn 11, forcing him back into fifth. An incident at the back of the pack between J.Maggs and Formosa brought out another safety car.

Racing resumed with four laps remaining, as Harris started to make his way back through the field, before setting his sights on the race leader. Alexander defended a late attack from Harris, on the final lap, all before taking the chequered flag 0.3864s ahead, to claim the Round win and extend the series lead to 60 points over Crick and a further 36 over Harris.

“A massive thanks to my team and our incredible sponsors Caltex Delo and Isuzu UTE Australia for their ongoing support. It’s been a great weekend, bring on Newcastle!” Alexander said.

The Caltex Delo® Racing Isuzu D-MAX SuperUte will return to the track for the final Round of the 2019 ECB SuperUte Championship, at the Coates Hire Newcastle 500 on 22-24 November 2019.